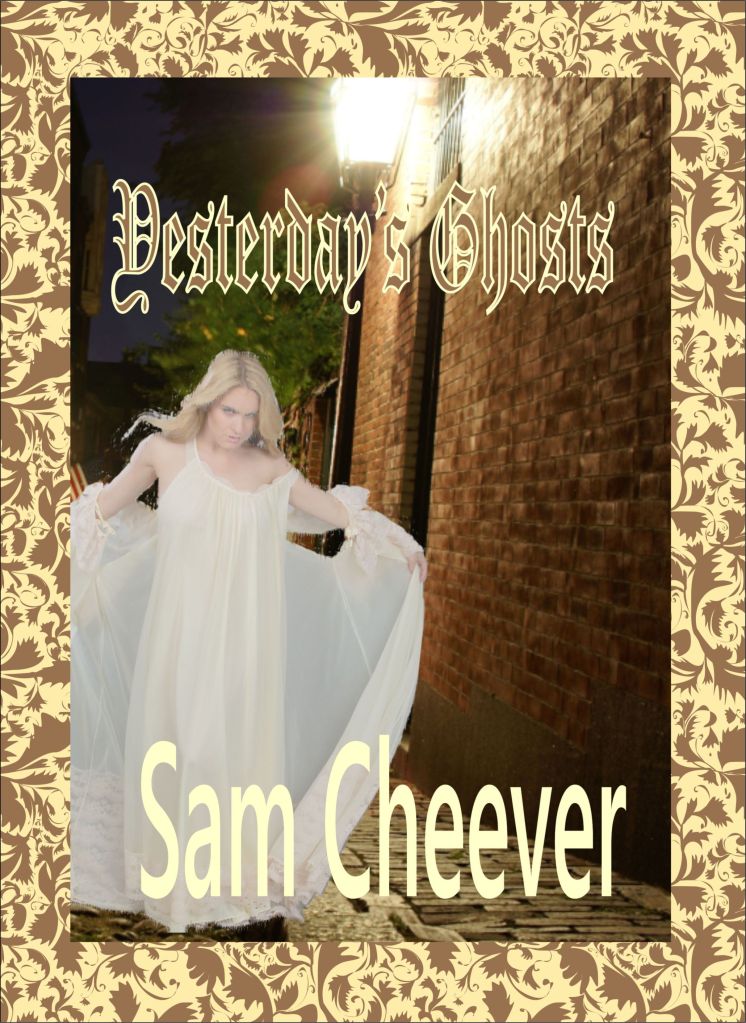 The ghosts of the past rarely remain there. Not when the future holds so much possibility for them.

When a local man turns up dead at the Apple Blossom Festival ball, Anna and Pratt discover the man had been writing a tell all book that outed the sins of a good portion of Crocker’s residents. So when the local cops set out to find the killer, it makes sense to enlist the help of ex big city detective Pratt Davies. Pratt’s new in town and therefore one of the few who should be unaffected by the book and able to deal subjectively with the myriad suspects surrounding the murder. But Pratt and Anna quickly learn nobody’s beyond this particular gossip’s range. In fact, it’s possible Pratt’s on the suspect list himself. Along with just about everybody else in Crocker!

Anna sat behind the counter of Yesterday’s Antiques and watched her two favorite men bicker over the positioning of a new settee she’d asked them to place in the store. Actually, one favorite man and one favorite ghost, though Josselin Zebediah had a life force nearly as big as hers. He just didn’t have a corporeal body to go with it.

Pratt Davies, her sexy assistant in the antiques store, shoved the settee a few inches closer to the wall and turned it away from the deadly rays of the sun. At well over six feet, with dark brown hair that he wore military short, golden brown eyes, thick lashes, a strong nose, a broad jaw, and full lips, Pratt wasn’t hard at all to look at and Anna found his presence in her store a daily distraction that she enjoyed very much.

His nemesis had long, muscular legs and broad shoulders, dark blond hair under a well-worn cowboy hat and intense dark blue eyes. “That ain’t right, Puke,” Joss told him heatedly. “It looks like a doggery for certain.”

“Well, that’s too bad, spook. The sun’s bad for the wood and the fabric. You’re just gonna have to live with it.”

The light fixture above their heads flickered and Anna thought about stepping into the fight. But then Bones, the resident mouse catcher and equal opportunity hater, jumped up onto the settee and spit at both of them before settling into a perfect, orange spiral dead center in the seat.

Pratt glared down at the cranky feline. “Don’t think I won’t move this thing with your fat butt on it, cat.”

The two shared a smile at Pratt’s threat and, just like that, the uneasy truce they’d been attempting to keep since they’d met a few days earlier dropped back into place.
“You should go home and get ready for the ball, Pratt.” Anna closed the record book she’d been pretending to peruse while she watched them bicker and looked up just in time to see him grimace.

Joss shoved his hat back on his head, grinning smugly. “Why so grum, Puke? You got them fancy duds and all.”

Pratt threw Joss a glare and headed toward Anna with a scowl on his handsome face. “I can’t believe you’re making me go to this thing.”

Anna pressed her lips together to hold back a grin. “It’s business, Pratt.” She grabbed the garment bag he’d draped over the counter earlier. “Besides, I don’t know what you’re worried about, you’re going to look very handsome in this suit.” She handed the bag to him and smiled. “I picked it out just for you.”

“If that’s an attempt to make me feel guilty for grousing…” his glower softened as he shook his head. “It’s working. Dammit.”

Anna laughed. “Good. I promise I’ll make it up to you. Besides, you might even have fun.”

He hooked a finger through the hanger and dropped the bag over his shoulder. “You can start making it up to me by saving me at least one dance tonight.”

Anna’s belly warmed with pleasure at the thought. “Deal. That’s an easy promise.”
They shared a smile that ended when Bones flew straight up from the settee, hissing and twisting around to smack the air where Joss had been a moment earlier. All his orange fur stood on end like somebody had stuck his tail into a light socket.

Above their heads, the ceiling light flickered as Joss showed his displeasure.

Despite Joss’s jealousy, Anna couldn’t help the smile that slipped across her face as she watched Pratt leave. Their recent battle with an angry spirit and an even angrier killer had brought all the feelings they’d been dancing around to the surface and, for the first time since Pratt had arrived at Yesterday’s Antiques, Anna almost believed they had a chance at something good together.

Unfortunately, the feeling wasn’t shared by the other inhabitants of her little shop. Namely one cowboy and one saloon girl from the early 1800s.

Said saloon girl popped into view a moment later as Anna was counting the day’s receipts.

Anna felt the cool wash of air across her neck and looked around. “Hey, Bess. I haven’t seen you all day. What have you been up to?”

The cranky specter frowned. “I reckon that’s none o’ your concern.”

Anna simply nodded. She was looking forward to the evenings events too much to let Bess’s churlish temperament ruin her day. “Did you happen to see Joss in the attic? He left in a tizzy and I need to talk to him.”

When Bess didn’t respond, Anna turned to find her staring toward the ceiling with a speculative expression. “Bess? Is something wrong?”

The ghost shrugged. “Some folks is just offish, is all.”

Anna closed the drawer to the antique cash register and turned to Bess. “Joss is a bit cranky because Pratt and I…well…” Anna felt her face heat and busied herself tucking cash into a money bag. “Just try to be nice to him. He’ll happy up soon enough.”

Bess looked at her like she’d lost her mind and then, made a disgusted sound with her lips. “It ain’t no great shakes to a curly wolf like Joss that the puke’s got designs on you.” She shook her head. “’Sides, Jossy and me got bigger problems right now.”
She popped away, leaving Anna more confused than she’d started. Shaking her head, Anna locked the front door and turned the Open sign to Closed.

She headed into the back room to grab the antique ball gown she’d found for the ball at the Bickershaw Museum. She couldn’t wait to get home and try it on.