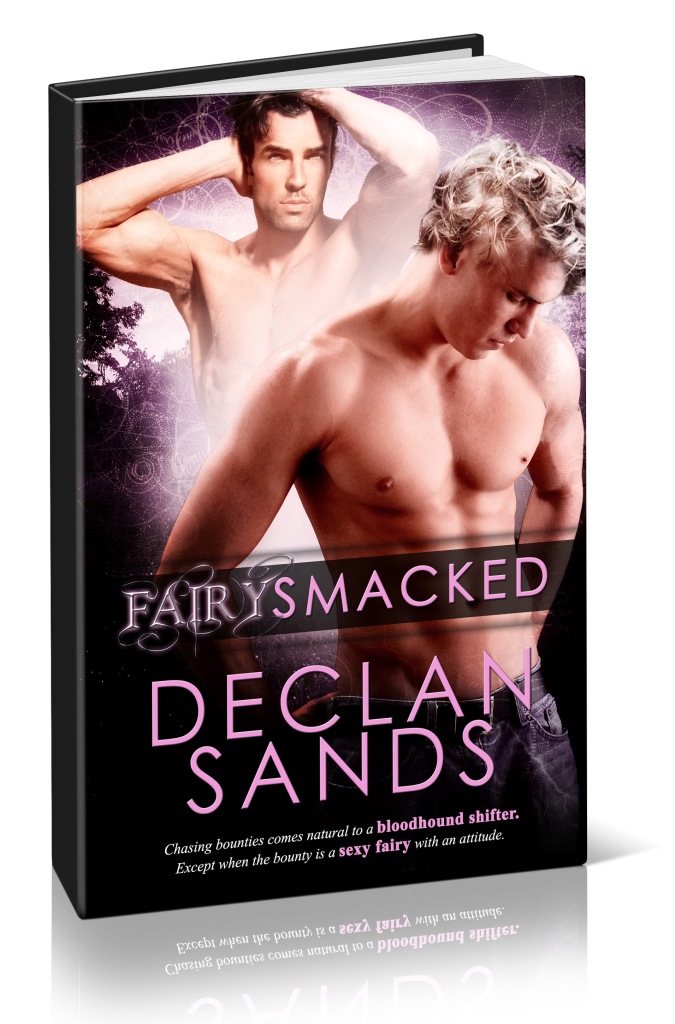 Chasing bounties comes natural to a bloodhound shifter. Except when the bounty is a sexy earth fairy with an attitude.

Bounty Hunter Matthew Blood is a Bloodhound shifter from the planet Eninac. Rum is an earth fairy who left the fairy mound to save some kidnapped fae. When they learn they might be pursuing the same people, they decide to join forces. Unfortunately, Blood soon discovers that fairy dust isn’t the only addictive thing about a fairy!

The dog snuffled him, whining as he flicked a hand to send it away. Bail Enforcement Agent Matthew Blood was on a case, and he didn’t have time for the usual displays of canine worship.

The man across the street climbed out of his car and stretched. He’d been on the road pretty much all day. He’d gone north again — Matt suspected he’d gone to Michigan, though he’d lost him around South Bend.
The little dog licked Matt’s arm and he growled, low and deep in his throat. Yelping with alarm, the cute bitch scurried away. But she didn’t go far. She dropped to her haunches beneath an abandoned car, her eyes periodically glowing red in the headlights arcing into a turn at the nearby intersection.

Matt returned his attention to the skip and found the street empty. “Fuck!” Glaring at the little dog, he quickly stripped, dropped to all fours, and shifted. He slid from the shadows and padded across the street.
Scenting the area around the car, Matt took care to keep his long ears out of a shiny puddle of dirty oil as he gathered as much information as he could from the odors surrounding the car and the spot where the skip had been standing.

The car was covered with a variety of aromas, many of them from another place. The salty tang of Great Lakes sand overlaid the smell of asphalt and rich, black earth trapped in the tire tread.

He padded around to the car door and focused on the bail fugitive’s scent. The man was tired, nervous — evidenced by the strong odor of sweat — and he’d had chili for dinner. The chili wasn’t sitting well in his stomach.

The bail fugitive also smelled like the product he’d been illegally carrying from Indiana to Michigan for months. The reason he’d been arrested. He’d never stopped his illegal activities, and he’d proven himself to be a runner. He should never have been let out on bail in the first place.

But Matt wouldn’t tell the cops that when he brought him in. He’d just take the certified copies of the arrest warrant and the undertaking and get paid for snagging the guy. If the guy ran again he’d get paid again. And there was no danger he’d escape Matt. With his special qualities and off-Earth monitoring technology, Matt could find and bring any skips he wanted back to jail. If his employee wanted to bond them back out again it was no skin off his talented nose.

Said nose lead Matt to the front door of a soot-stained brick building, where the skip’s scent trail was cut off. He shoved at the door with his nose but it was firmly shut. He’d have to shift back to follow the skip inside.
Matt loped back toward the alley where he’d shed his clothes, thinking that a race of creatures which could trace its roots back millennia, with technology allowing them to travel the universe to distant planets, should have come up with a fix for the opposable thumb issue.

He rounded the corner to the alley and the little bitch lifted her head, happily wagging her grubby tail. She gave him a single bark in greeting. Matt’s bark wasn’t quite as happy. But it served to get her off his pile of discarded clothes.

There was a soft sound, like a gasp of supercharged air, as he was pulling on his last shoe. Matt’s head shot up. Glass shattered out into the night, followed by a dull, meaty thud. Still working his way into his sneaker, Matt hobbled back out to the street and found his skip, lying in a spreading pool of his own blood on the glass-strewn sidewalk.

A sharp intake of breath from above drew Matt’s gaze, four stories up, where a pale, handsome face was outlined by the jagged remains of the broken window. A terrified gaze locked onto his.

“Well, shit!” Matt started running even as the face disappeared from view. It looked like he’d be bringing a murderer to the police, rather than a lowly, dead drug smuggler.

Matt hit the locked exterior door and reared back, kicking it hard. The flimsy door slammed inward and he hit the stairs, moving at superhuman speed toward the floors above.

Footsteps pounded over his head, accompanied by the sound of terrified breathing as, presumably, the man he’d seen in the window above was making a run for it. A slim, dark form flashed by the top of the stairs as Matt hit the fourth floor landing and he leapt, hitting the runner mid-body and sending him sprawling sideways with a yelp of alarm.

They skidded across the thin, dirty carpet and hit the wall opposite the stairs. The man beneath him started swinging, his fists glancing off Matt’s face and shoulders as he fought desperately to get free.

Matt struggled to hold him down while trying to still the man’s flailing arms and legs. The man’s breath wheezed in and out of his chest and beads of sweat flew as his desperation increased. Matt’s sensitive nose scented ozone just before one of the flailing fists connected to Matt’s temple and his head snapped sideways. It was a good shot for such a slender assailant, and it caught Matt off guard.

Blood ran from his nose, and he saw stars. Light flashed, heat flared, and Matt flew backward and hit the wall hard. The edges of his vision folded inward and turned black as slipped down the wall and passed out.

Smashwords: https://www.smashwords.com/books/view/513063
Declan Sands writes romantic paranormal/fantasy and mystery/suspense, creating stories that celebrate the joy of love in all its forms. Known for writing great characters, snappy dialogue, and unique and exhilarating stories, Declan is the award-winning author of 50+ books and has been writing for over a decade under several noms de plume.